Thank you for your patience while we retrieve your images.

INLAND​: The Abandoned Canals of the Schuylkill Navigation

After much bushwhacking and research, with guidance from other bushwhackers and researchers and support from the Fairmount Water Works, I have photographed the entirety of the 200-year-old Schuylkill Navigation system, or what remains. Until now there has been no such contemporary record.

At the completion of the Navigation's last short reach in 1828, the Schuylkill River was tamed from Port Carbon to Fairmount, 108 miles. After some additions and rerouting, by the 1830s there were 32 dams, 51 miles of slackwater pools, 57 miles of canals, and 120 locks. Even before the official opening of the Navigation in 1825, boats began to bring coal down from the mountains, and canals provided water power to factories. The Navigation literally fueled the Industrial Revolution throughout the watershed and beyond. Unfortunately, it also led directly to the pollution of the river, then and now the drinking water supply of Philadelphia and three other cities. The Philadelphia Watering Committee looked for other sources, but nothing else was viable but to clean the Schuylkill.

The river's recovery began with the Schuylkill Project of 1947-51, the first major government (state and federal) cleanup of an American river. Most of the dams were dismantled. Coal waste that had piled up behind them was dredged, impounded in new basins, and recycled. The river was finally able to clean itself, a huge step toward healing the ecosystem. The project buried much of the Schuylkill Navigation infrastructure.

But not all of it.

Now, as the expanding Schuylkill River Trail leads us to previously inaccessible sections of the riverbank, more of these sites may be cleaned up, commemorated, even partially restored. But many will lie neglected on private property. At the 200th anniversary of its construction, I'm documenting the abandonment of the industrial landscape that has shaped my native Schuylkill River Valley ever since the first dam was built.

All the sites are in Pennsylvania.
All photographs ©Sandy Sorlien 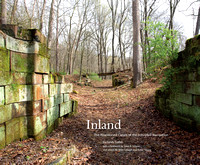